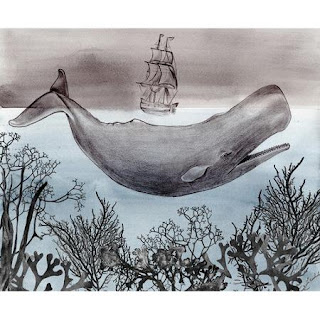 The huddling, large-scale flash mob performances of the Emperor Penguins have been performed for centuries. These performances involve sometimes up to 3,000 performers in these impressive pieces including the use of song cycles utilizing the vocalization of two frequency bands simultaneously.

Stories of the Maori explorers visiting Antarctica back to as early as 650 CE exist in Maori culture. Women were regular sailors on these journeys, so it can be assumed that Maori women visited the continent. They probably performed Maori rituals on the ice.

By the end of the 19th Century, Humpback, Fin, Sei, Minke and Blue whales, mostly female, started to develop songs and performance and protest art against the beginnings of whaling in the Southern Ocean. Unfortunately, no records of these performances exist due to human disinterest and the male homo-sapien pre-occupation of most drama, theatre and performance historians and critics.
Posted by Mark Eckersley at 8:56 PM