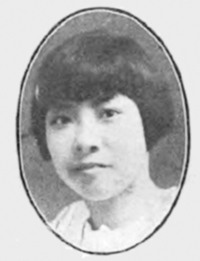 Pu Shunqing (濮舜卿; 1902 – 1971?) was a great Chinese writer, playwright, screenwriter, assistant director and film director. She was married to the early cinematic pioneer of Chinese cinema, the great Hou Yao. She was a feminist and an early Chinese advocate for female equality.

While at Southeast University in Nanjing, Pu Shunqing jointly established the Southeast Drama Society with her future husband Hou Yao. One of the first plays she wrote was Paradise on Earth which uses the plot of the ‘Book of Genesis’ from The Bible to further a feminist stance to the point where the character of Wisdom says “…if you don’t believe in God, he will disappear.”

In 1924, Pu starred in the film The World Against Her directed by her husband Hou. In 1925 she wrote the play, Cupids Puppets which she turned into a screenplay later that year. This effectively made her the first female Chinese screenwriter. Her work in theatre and film can be seen as a style of Morality play with a feminist bent – Feminist Morality drama for want of a better term.
Pu and her husband joined the Minxin Film Company in 1926 and wrote the screenplays and edited a number of films. She also wrote two playscripts (Hibiscus and Her New Life) during this period that she adapted into screenplays which were never made into films. For her work for anti-Imperialism and the right of women, she was given the official label of a May Fourth Movement playwright.
By the 1930’s, Pu lived in Shanghai where she worked as a lawyer and a newspaper columnist. She continued to write short plays and poetry for much of the rest of her life. 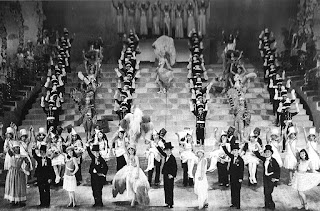 The Takarazuka Revue is a group founded in Takarazuka in Hyogo Prefecture, Japan in 1914. puts on mostly Western style musicals. It was one of the first groups in Japan to reintroduce females onto the Japanese stage performing in Kabuki-style plays and modern plays dealing with Japanese traditional stories, historical events and in more modern times Manga-style characters and narratives.
The Takarazuka Revue tends to organize each review into five troupes such as the Moon Troupe, Snow Troupe, Star Troupe, Flower Troupe and Cosmos Troupe  (the new experimental troupe). Some people have described the Takarazuka more like a circus, others describe it more like a Medieval pageant while others see it more like a version of Japanese vaudeville. Every year, thousands of Japanese women audition for a contract in one of the troupes. 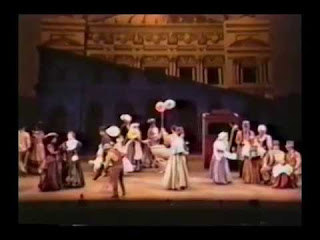 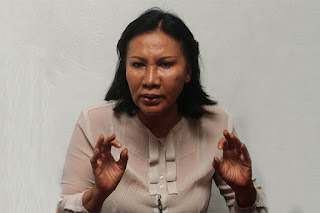 Ratna Sarumpaet is a female Indonesian Human rights activist, playwright, theatre producer, director and actress who was born on July 16th, 1949 in North Sumatra. In 1969, while studying architecture in Jakarta, she saw a play by the Javanese playwright Willibrordus S. Rendra and dropped out of university and joined his acting troupe. She worked with the troupe for five years and then married and converted to Islam. She then founded in 1974, her own troupe called Satu Merah Panggung (One Red Stage) and adapted into Bahasa Indonesian many foreign plays for the troupe including Rubaiyat of Omar Khayyam, Romeo and Juliet and Hamlet (in which she played Hamlet in the first production). Her husband proved abusive and eventually divorced her husband and started working in television.
Sarumpaet returned to theatre in 1989 performing in an adaptation of Othello. She also began working as a director in 1991, with the television serial Rumah Untuk Mama (House for Mother). In the same year, she adapted Jean Anouilh’s Antigone into Bahasa Indonesian for the Jakarta stage using a Sumatran Batak setting.
In the 1990’s, particularly after the rape and murder of the female labour activist Marsinah, Sarumpaet became more politically active and started writing her own original stage plays in 1994 starting with Marsinah: Nyanyian dari Bawl Tanah (Marsinah: Song from the Underground). This was followed by several other politically charged works, several of which were banned or restricted by the Suharto Government including Terpasung (Chained; 1995), about male domination and violence against women, and Pesta Terakhir (The Last Party; 1996), about the burial of a dictator where no funeral-goers turn up. In 1997, she wrote a monologue called Marsinah Menggugat (Marsinah Revolts; 1997), in which she graphically describes the death of Marsinah. The play was banned in Many cities. In the 1997 Indonesian elections, Sarumpaet and her theatre troupe performed Street Theatre with a coffin labeled ‘Democracy’. She was arrested and jailed. After her release she continued to participate in protests and do street theatre in the protests. She wrote the protest play/satire Sang Raja (The King). She was threatened with arrest for dissent and she had to leave Indonesia.
When in the late 2002 when Sarumpaet returned to Indonesia, she wrote a stageplay entitled Alia, Luka Serambi Mekah (Alia, Wound of Serambi Mekah) about the massacres in Aceh province. She continued to write political plays which dealt with child trafficking and female suppression in Indonesian. In 2005, she wrote Pelacur dan Sang Presiden (The Prostitute and the President) to give more prominence to the issue.  In 2006, Sarumpaet organised the seventh triannual Women's Playwright International Conference on the island of Bali. She continues to write political work and make public political statements. She was arrested again in 2016 but was soon released. 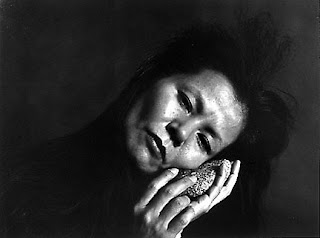 Natsu Nakajima is one of the original female exponents of the Japanese Butoh dance drama form. She was born in Sakhalin, Japan in 1943. She studied dance from an early age but at the age of 19, she joined the Kazuo Ohno Dance Studio  and started work with the Butoh master Tatsumi Hijikata one year later. She was a co-founder with Hijikata of the first public Butoh performance pieces. Throughout the 1960’s, she performed perform pieces sometimes written and directed by Hijikata and sometimes written by herself.

In 1969, Nakajima stablished her own Butoh company Muteki-sha, and developed the Butoh classics Reiko Zo (A Portrait of Reiko) and Natsuyasumi (Summer Vacation) in 1972. This was followed in the 1970’s by Hinemos Kagurazaka-sho (One Day in Kagurazaka), Ogikubo kannon (1975), Sorewa Konoyouna Yoru datta (It was a Night Like This) in 1976 and Gogh San e (Dedicated to Mr.Van Gogh) in 1977.

By the 1980’s, Nakajima started to perform internationally and she took her 1982 seminal piece Niwa (The Garden) to international festivals in the England, Scotland, Ireland, Belgium, Spain, Israel, France, Italy, Korea, Canada, the USA and Mexico. In 1987, she developed the esoteric Sleep and Reincarnation from the Empty Land which she toured in Spain, England, Australia, Sweden, the USA, Canada and Brazil. She also was commissioned in 1988 to develop and choreograph Ghost Stories for Montreal Danse in Canada.

During the 1990’s, Nakajima spent many years teaching and mentoring many young mostly female performers and theater makers while she refined her Butoh techniques. She also was commissioned to develop a piece she eventually named Towards Diane Arbus for a Chicago festival in 1992 and the 1994 piece commissioned for a Canadian company entitled The Fujiwara Invention. During the 1990’s she also worked at the New York Laban Institute and established special Movement and Dance education programs for disabled children and adults in Japan and the United States. 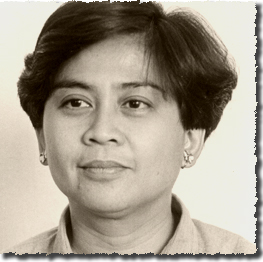 Malou Leviste-Jacob is a Filipino playwright and theatre maker who was born in 1948. She studied in Communications and Film production at Maryknoll College and then at New York University. Her primary work has been done with PETA, a Filipino theatre and activist troupe based in manila which uses theatre for activism and social change.

Working for many years with the PETA Kalinangan Ensemble, Leviste-Jacob has worked as a playwright and ensemble member on a number of plays and projects. One of her first plays was Timbangan ay Tagilid in 1970 and this was followed by Aidao in 1972 which was co-written with Franklin Osorio. Her most famous works were Raha Sulayman at Megat Salamay (1978) and Juan Tamban (1979) which both dealt with the contemporary social problems of modern Philippine society using a range of theatre styles from realism to expressionist to Epic Theatre. These plays and projects were followed by Ang Mahabang Pagdadalawang Isip sa Maikling Buhay ng Isang Peti-Burgis in 1982 and Pepe in 1983. Much of her work has been done with the poorest communities in the Philippines including this who live on the Manila garbage dumps.

During the late 1980’s and 1990’s, she started to work more as a film maker and academic but her significant theatre works of this period were Bayang pinagtaksilan ng panahon : dulang satirikal (A Country in Search of a Hero: A Political Satire) and Huling salubong : dulang may tatlong yugto (A Significant Life - The Last Sentence in Three Scenes). She has also written and edited many works on Political Theatre and Multi-Media performance projects. 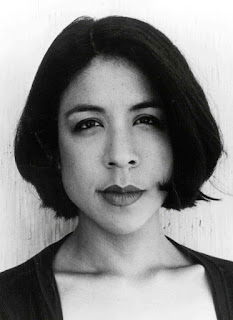 Naomi Iizuka is a female playwright born in 1965 in Japan to a Japanese father and an American Latina mother. She grew up in Japan, Indonesia, the Netherland and the United States. She attended Yale University. Her dramas normally address social issues but she also experiments with form and performance spaces.
Much of her work also seems to be influenced by Classical and renaissance theatre. Iizuka first came to notice with her 1997 contemporary adaptation of the myth of Eurydice and Orpheus entitled Polaroid Stories. The play has street kids instead of Gods as the main characters and has the young characters who are drug dealers, prostitutes and homeless youth, tell stories that are sometimes real and sometimes lies. As a playwright who believes in the collaborative processes of theatre, Iizuka has worked closely a number of times the female director Ann Bogart most famously on War of the Worlds (2000). Her 2006 adaptation of Hamlet entitled Hamlet: Blood on the Brain is archetypal in essence and transposes Shakespeare’s story to 1980’s Oakland and involves a young man who on getting out of prison, finds that his father has been murdered and his uncle seems to have taken up with the young man’s mother and has assumed the role of head of the household.
Some of her work includes Lizzy Vinyl (1990), And Then She Was Screaming (1990), Body Beautiful (1990), Crazy Jane (1992), Portrait of Bianca (1992), Greenland (1992), Tattoo Girl (1994), Carthage (1994), Coxinga (1994), Ikeniye (1994), Skin (1995), Marlowe's Eye (1996), Aloha, Say the Pretty Girls (1999), Language of Angels (2000), 36 Views (2001),17 Reasons (Why) (2003), At the Vanishing Point (2004), Strike-Slip (2006), Anon(ymous) (2006), After a Hundred Years (2008), Ghostwritten (2009), Concerning Strange Devices from the Distant West (2010), The Last Firefly (2011) and Good Kids (2014). 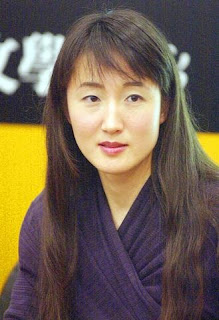 Miri Yu was born in Yokohama, Japan in 1968 but is a Zainichi Korean playwright who writes in Japanese. From the age of 16, she joined the Tokyo Kid Brothers theater troupe and worked as an actress and assistant director. In 1986, she formed a troupe called Seishun Gogetsutō (青春五月党), and around this time she moved away from improvised work and started to write her own novels and plays. Her work explores the notion of identity as a complex issue since Miri Yu is herself a person living between two cultures. Her first play was Mizu no naka no tomo e (To My Friend in Water). Her most significant plays are the 1992 piece Uu no matsuri (Festival of the Fish) and Green Beach (1993).

Weickgenannt, K. (2002). The Deemphasis of Ethnicity: Images of Koreanness in the Works of the Japanese-Korean Author Yû Miri. Images of Asia in Japanese Mass Media, Popular Culture and Literature: Papers Presented at ICAS, 2, 9-12.