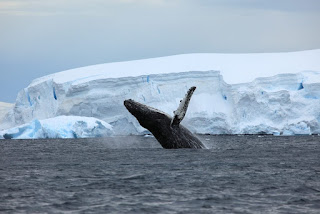 The devastation of whaling in the 20th Century particularly caused by Russia (the U.S.S.R) and Japan almost brought many communities to the brink of extinction. The U.S.S.R killed over 534,000 whales in the 1960’s and 1970’s. The stories of this were probably passed on through the songs of the whales.
Films of whales in Antarctica in the 1980’s helped the development of the Southern Ocean Sanctuary in 1994 which was signed by 23 countries. Japan continues to carry out culling of whales for ‘scientific purposes’ in the region. Female whales continue their dance of life and songlines until today. The culture, dances and performance rituals of female and male penguins have become more widely publicized and known through the 2005 film March of the Penguins and the 2006 animation feature Happy Feet. Each year over 1.2 million female penguins, 1.2 million female seals, 900,000 female whales and 150,000 female petrels, skuas, shags and albatross, perform across the continent of Antarctica. 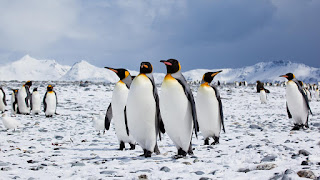 On another note, the first human play probably performed on the Antarctic continent was probably Ticket of Leave, a Victorian farce by Watts Phillips which was performed by male expedition members in Discovery Hut (renamed the Royal Terror Theatre for the occasion) on June 25th, 1902. Horace Buckridge played Mrs. Quiver, Frank Wild as Mr Quiver and Gilbert Scott performed the housemaid, Mary Ann. Pages of the script were discovered during the hut’s 1963 reconstruction. 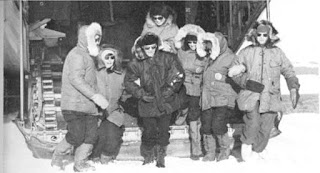 The first female humans to probably perform on Antarctica were probably Americans Lois Jones, Kay Lindsay, Eileen McSaveney and Terry Tickhill in 1969 who were part of the first female expedition to the South Pole. In July 1969, these four women did readings from poetry, journals and at least one dramatic speech in a hut in Antarctica. 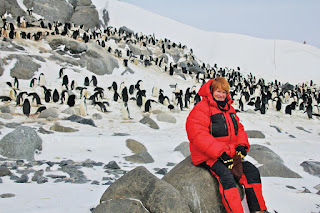 Now every year, a couple of hundred people live on Antarctica over the winter each year and this rises to over a thousand in the summer months. So at any point 40 to 300 women live on the Antarctic continent. Regular performances happen every year with many female performers. Though I doubt that the human performances on Antarctica will ever reach the scale and spectacular performance standards of their avian, cetacean and pinniped cousins.
Posted by Mark Eckersley at 4:51 PM