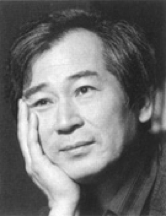 Tadashi Suzuki is a Japanese theatre director, practitioner and writer who created a unique style of physical theatre and actor training. His theatre is often characterized by the organization of his actors on stage into Chorus and protagonist/s; the repetition of powerful imagery or metaphors such as a mental hospital; the use of simple staging which relies on performer, lighting and sound to create a sense of mood, place and time rather than complex scenery; the structural use of collage and juxtaposition which is underpinned by the use of simple unifying framing devices and a sense of the ‘animal energy’ (the psychophysical forces of the theatrical encounter between performer and self and performer and the audience).
Born on June 20th 1939 in the small port mura (village) Shimizu, Japan situated beneath Mount Fuji, Tadashi was the third child of a timber merchant. His world was fashioned by the bombings of Shimizu harbour at the end of WWII, his memories of living in a cramped traditional Japanese house and the tumultuous world of a post-WWII Japan trying to rebuild itself.  His was the world described in many of the Japanese novels and films of the 1950’s, a Japan caught between traditional and Western values. In many senses this can be considered one of the major pre-occupations and central explorations of his work as a drama practitioner.