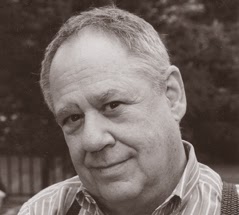 Schechner is a American director, writer, theorist and academic who founded the Performance Group in 1968 and invented a form of theatre called Environmental Theatre and also helped to invented the theory of Performance Studies that advocates that all research (even outside the Performing Arts) has a performative aspect.

Schechner shaped the space or theatre to conform to each play and its themes and the internal space or environment of the text. Sometimes sets were constructed in front of the audience. Sets often used multilevel platforms, balconies, ramps, and scaffolds surrounding a stage that encroached on the audience’s territory, providing a wider range of space for the actors and a greater flexibility of interaction between the audience and performers. The audience of the environmental theatre was invited, even expected, to participate. The Commune, one of Schechner’s first theatre companies, asked the audience’s removal to remove their shoes before entering the space. 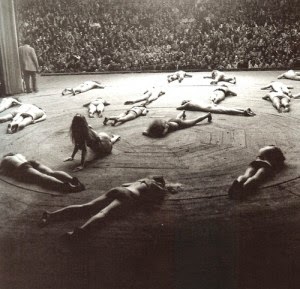 To enhance the immediacy of experience the multiple-focus theatre replaced the traditional single focus, allowing more than one scene to be staged at the same time. The concept of environmental theatre was taken to greater extremes by radical artistic groups as the Bread and Puppet Theatre (U.S based) and Welfare State International (U.K. then internationally-based). Both took art to the streets, often working in derelict urban neighborhoods in the latter half of the 20th century and at the beginning of the 21st.

Exercises
•    This first exercise is about “letting the space have its say”. Students find a space in the room which they want to explore. Students start with a ball of their own energy and they establish this and then throw their imaginary ball around and off the surfaces of the space. Let the space and sense of the space control the movement of the imaginary ball. This response is ‘haptic’ (meaning to touch or influence). Schechner advocates through the senses to create a feeling for space.
•    As an extension to this, students can ‘narrate’ the space. This is where a person or person acts as the ‘voice’ of the space and tells the students who come into the space what to do in the space. The ‘voice of the space’ can also react to what is being done to him or her by the other students moving in the space i.e. each step can be like a hurt or each touch of a surface can be like a caress.
•    Another exercise is the use of Rasaboxes or Sanskrit ‘Emotion Boxes’. Nine areas are drawn on the floor in the space. Workshop participants move within the boxes, jumping from one emotional state to the other and at times engaging interactively. 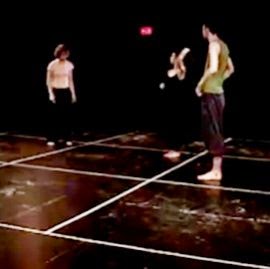 Any of these exercises can be used with text. Schechner had a fondness for the text of Edward Albee. Use the following text from 'Whose Afraid of Virginia Woolf?'

MARTHA
Fix me a drink.
GEORGE
Haven't you had enough?
MARTHA
I said fix me a drink!
GEORGE
Well, I don't suppose a nightcap
would kill either of us.
MARTHA
A nightcap? Are you kidding? We've got guests.
GEORGE
Got what?
MARTHA
Guests.
GEORGE
Guests!
MARTHA
Yeah, guests. People.
We've got guests coming over.
GEORGE
When?
MARTHA
Now.
GEORGE
Good Lord, Martha, do you know what time it is?
Who's coming over?

Posted by Mark Eckersley at 8:53 PM