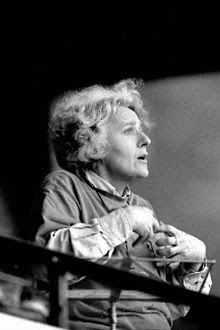 Ariane Mnouchkine is a Female French theatre director who was born in 1939 and founded the Paris avante garde ensemble called Theatre de Soleil.

After studying Psychology in the UK, Mnouchkine returned to Paris to work with Jacque Lecoq. By 1964, she had formed her own theatre collective called Theatre de Soleil  (Theatre of the Sun) where she tried to create a more universal theatre which uses different styles and she attempted to create social and political critiques of local and world cultures.
Mnouchkine created a hybrid theatre which used aspects of physical theatre and her processes were centred in her belief in theatre as a truely collaborative art form. She wanted to create a theatre that moved beyond playwrights and directors and move to a form of theatre "... where it will be possible for everyone to collaborate without there being directors, technicians, and so on, in the old sense." She and her company develop their works using many techniques. Sometimes the troupe developed ideas out of improvisational exercises. They also incorporated multiple styles of theatre in their work - ranging from Ancient Greek rituals to commedia del arte to Asian rituals and theatre styles like Kabuki and Kathakali and Chinese theatre traditions.
Her company, Théâtre du Soleil would perform productions often in found spaces like barns or gymnasiums because Mnouchkine does not like being confined to a typical stage. Similarly, she feels theatre cannot be restricted with the "fourth wall". When audiences enter a Mnouchkine production, they will often find the actors preparing (putting on makeup, getting into costume) right before their eyes.
Mnouchkine developed her own works, like the political-themed 1789, but on the whole she is known for her recontextualisation of the works of others through working on classical texts, like Moliere’s Tartuffe (1979), Shakespeare’s Richard II and Twelfth Night (1981-1984) and the Ancient Greek Oresteia Trilogy (1990-1992). Since 2000, she has worked on recontextualising the work of Ibsen and she won the Ibsen Award in 2009.
Mnouchkine encourages company members and audiences to think of the stage as a sacred space. Productions always include the ritual of performers putting their makeup and costumes on in front of the audience. Rehearsals usually last for six months and since casting is based on improvisational sessions it can take weeks or months to determine. During the rehearsal process pictures and books are used to stimulate thoughts and responses about characters and the development of sets, lighting, costumes, styles of makeup, masks, sound and music. Like Brecht, Mnouchkine sees the actor as primarily a storyteller and performances by Theatre du Soleil are therefore highly physical and often demand athletic and acrobatic skills. Actors are also required to represent and convey strong emotions and images by recognising what Mnouchkine calls ‘the state'. Basic states can change according to circumstances, but every actor is encouraged to locate and depict a central feeling that dominates the physical and emotional life of a character before exploring such changes.
In keeping with the utopian ideals of the company, Theatre du Soleil's work is non-militant yet socially and politically relevant. The company has remained a uniquely collaborative project and all members of the group perform a variety of  technical, artistic and menial tasks. Her motto is often seen as “…In the morning sweep the floor, in the day write the poetry and in the evening find poetry in sweeping the floor…”
Exercises
Take a play or a scene from a play such as Aristophanes' Lysistrata. Talk about the general themes such as women being the victims of war and women trying to find a way to bring peace in the midst of continuous war. Discuss the differences between men and women. Collect modern articles on war and the way that women are victims of war and try to bring about peace.

Now take a scene from the play Lysistrata and try to rewrite, intersperse or collage the material from the recent news and articles into the original text and try to create a modern version of the Lysistrata script.

You may also want to take your group to a 'found' space and see what type of performance of your version of the Lysistrata story might be 'suggested' or 'informed' by the space.

Posted by Mark Eckersley at 7:25 PM