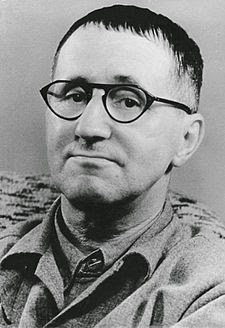 Eugen Berthold Friedrich Brecht (1898- 1956) was born in the city of Augsburg, Bavaria not “… In the Black Forest..” as one of his poems claims. He was the son of a paper manufacturer and attended school in Augsburg and studied for 1 year at the University of Munich. By 1924, he had published a few poems and had two plays produced, Baal (1922) and Trumpets in the Night (1922) and had gained a job as dramaturge with Deutsches Theater. He worked with Piscator who had created the notion of an Epic Theatre which Brecht built on. In 1928, he achieved notoriety for his collaboration with composer Kurt Weill on a modern musical adaptation of Gray’s The Threepenny Opera but by 1933 he had to leave Germany because of his leftist political beliefs and vocal antagonism towards the Nazi Party. Brecht and his family stayed in exile in various Scandinavian countries and the U.S.A. until he returned to Communist East Berlin in 1947 where he set up the Berliner Ensemble which he ran until his death in 1956.

Over the course of his lifetime, Brecht wrote and/or collaborated in writing 55 plays. Many people believe that Brecht understated or underplayed or even 'stole' without fully acknowledging the work of his collaborators particularly those who were females. Some the important collaborators ans co-writers of Brecht's works were Elisabeth Hauptmann, Kurt Weill, Margarete Steffin, Ruth Berlau, Hanns Eisler and Helene Weigel. The most important designer for Brecht's plays in his time was Casper Neher. Some of the styles inherent in Brecht and his collaborators' plays are: 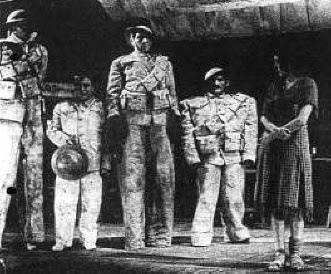 Epic Theatre is form of theatre is “non-Aristotelian” rejecting catharsis, empathy and imitation in Aristotle's terms, in favor of "alienation effect.” Russian Formalists used the term ostranenie (making strange) and Piscator in fact developed the first epic theatre model. Brecht viewed theatre as part of an enlightenment project, not mere entertainment. Brecht's narrative style, which he called epic theater, was directed against the illusion created by traditional theater of witnessing a slice of life.

Some of the elements of Epic Theatre are:

Multiple roles, Demonstration rather than act role, Use of narration and Direct Address, Gestus (Gesture with social meaning), Stylized movement, Voice as social vehicle or stylistic through song or chant, Music and song as Alienation or distancing, Masks, puppetry, Verfremdungseffekt (V-effect), Cabaret as commentary, Placards, Signs, Slides, Film, Lighting and stage effects in full view of the Audience.

As a director of the Berliner Ensemble, Brecht developed techniques so his actors would not inhabit or “be” the character but rather be a “representation “of the character.  In rehearsals, Brecht as a director told his actors to break into unrelated songs at moments of emotion, speak in the third person, the past tense and even say their stage directions. As a director, Brecht encouraged his actor’s not to become immersed in the events on stage. Brecht’s form of Epic Theatre centred on and emphasized:
•            The Socioeconomic basis for theatre as spectacle, subject matter, and audience involvement
•            Plays/production style as commentary on society; goal is to instigate social change.
•            Author as producer, as maker as of any other product
•            Destroy the theatrical illusion
•            Dialectical theatre: discordant, jarring elements (music v. text or commentary by actors, for example)
•            In theory, Brecht's plays are “anti-illusionistic.” Can be seen as a reaction to theatre of the late nineteenth century, with its emphasis on spectacle
•       Brecht developed the Verfremdungseffekt or "Alienation-effect"

Brecht’s techniques and practices include:


Exercises
·      Students pair up and move around a grid at a fast pace. When the instructor claps his hands, each pair tries to make instant statues of the following: Romeo and Juliet; summer and winter; cat and mouse; hero and coward; song and dance; rich and poor; war and peace. Such poses represents "gest," the conveying of attitude or point of view through gesture.
·      The director gets a list of songs in four or five different styles that the actor or actors know well. The actor or actors is told to select a potentially climatic or emotional speech from a play and just at the moment of greatest tension or emotion, the director yells out the name of the song known to the actors or actors (the director should chose a song which does not capture the emotion, mood or atmosphere being portrayed). The actor or actors must break into the song and after they have finished return to the speech or scne or return to the end of the speech or scene.
·      The director selects for the actor/actors a potentially climatic or emotional speech from a play. It should be a moment where the actor reveals something and/or primarily speaks in the first person. The actor is asked to act out the gestures and actions as he would normally do them. The actor is instructed by the director to convert all the vocal aspects, speech and individual utterances into the past tense and the third person (i.e. “So I ask you to turn back and to bring me home” becomes “So HE asked you to turn back and brought HIM home.”).
·      Choose a scene where there are many directions, emotions and actions written in the script. The director instructs the actor/actors to read all their lines and the stage directions as well. The actor can sometimes act out the stage directions but only as “past tense”, in other words only after they have spoken the directions out aloud without emotion. "...the epic poet presents the event as totally past, while the dramatic poet presents it as totally present."
·      “The epic invites calm, detached contemplation and judgement; the dramatic overwhelms reason with passion and emotion, the spectator sharing the actor's experiences.”