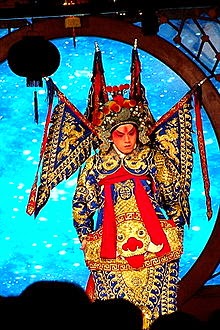 Peking Opera or Beijing Opera is a traditional Chinese form of theatre which is a hybrid of previous Chinese theatre forms and uses a combination of conventions and forms including singing, music, dancing, acting, mime and acrobatics. The traditional repertoire of Peking or Beijing Opera includes over 1,400 works based around stories from Chinese history, folklore, archetypes and modern forms of this form have embraced contemporary Chinese history, stories and life.

When the Communist Party of China finally took power in Mainland China in 1949 after the Chinese Civil War many artistic forms like Peking or Beijing Opera were associated primarily with the Nationalist and imperialist doctrine and many pieces were banned or brought in line with Communist ideology and form. During this period in Mainland China, 8 plays were officially sanctioned including operas such as ‘The Legend of the Red Lantern’. Many of the operas performed in Mainland China at this time took on more revolutionary and proletarian ideology and often the endings were changed to reflect Communist messages and themes. Meanwhile in Taiwan, the opera form became a political symbol of the Kuomintang Government’s claims to being the sole representative of authentic China and Chinese Culture. The political use of Peking Opera in this way was often at the expense of more indigenous aspects of Taiwanese cultural forms. In British Hong Kong, Peking Opera was treated as a traditional Chinese form and specific more traditional forms of the opera were encouraged there during this period.

Peking or Beijing Opera's two main musical elements have their origins in Han Opera and thus Han Opera is known as the Mother of Peking Opera. Another well known part of this performance form is the Xipi which translates as 'Skin Puppet Show' and refers to the Chinese puppet sections which often appear in Peking or Beijing Opera which involved sung stories acted out by puppets. Much of the language and dialogue either sung or spoken in Peking or Beijing Opera is an old form of Mandarin Chinese which has its origins in Zhongyuan Mandarin. By the late 19th century, the Anhui troupes acrobatic elements had become a regular part of performances too as had the simple singing forms which became popular with everyday Chinese.

There are four skills which Peking or Beijing Opera performers must master and eventually perform effortlessly:
-       Song
-       Speech
-       Dance-acting (including dance and pantomime)
-       Combat (including acrobatics and fighting)

The form of singing, speech and movement is stylized and the grace and beauty of each is a much sort after quality. The movements in particular have symbolic elements and meanings.

There are hundreds of different styles of music in Peking or Beijing Opera which can be divided into two major forms:
-       Xipi (西皮)
-       Erhuang (二黄)

Characters and Roles
There are many roles and characters in Peking and Beijing Opera. Here are the main ones:
-       The Sheng (生) is the main male role in Peking opera and it has many subtypes including the laosheng, xiaosheng and wusheng roles. Some laosheng characters are Hongsheng, a red-faced older male, Guan Gong, the Chinese god of sworn brotherhood (a loyal character) and Zhao Kuang-yin, the first Song Dynasty emperor. Sometimes these characters sing in a low voice. Younger male main characters are known as xiaosheng and usually are typified by singing in a high, shrill voice. On-stage, xiaosheng characters are often involved with beautiful women. The wusheng are combat or martial arts characters who also do acrobatics and sing in a more natural voice.
-       The Dan (旦) is a general name for any female characters in peking or Beijing Opera. The five subtypes of Dan are laodan (older women), wudan (martial arts and acrobatic women), daomadan (young female warriors), gingyi (sophisticated and elite women) and huadan (vivacious, sometimes forthright and unmarried women). A modern sixth type called huashan (who is a combines the sophistication of gingyi and the sensuality of huadan) has emerged in recent times. Sometimes these characters walk with a cai qiao, or "false foot" technique which imitates the walk of a woman with bound feet.
-       The Jing (净) is a painted face male role and is normally forceful and sings in a deeper voice and uses strong exaggerated actions. There are fifteen major painted face designs used and the colours and patterns derive from traditional Chinese color symbolism and divination on the lines of a person's face, which are seen by many Chinese to reveal the nature, life or personality of a individual. Jing characters often have more of a physical or acrobatic role in performances.
-       Chou (丑) are male clown roles. Chou means ugly and often these characters appear as merchants, jailers or in a military role. These types of characters are the most acrobatic of the peking or Beijing Opera characters. Chou characters wear special face paint, called xiaohualian, which distinguishes them from Jing characters because it has a small patch of white around the nose. This character is often accompanied by drums or a small gong or a cymbal. The character sometimes has a clapper stick and speaks and sings in local dialect and often improvises songs.

Training for Characters
Training takes years for Peking or Beijing Opera performers. In the past performers were chosen as six or seven year olds. Training took place in formal Peking Opera schools where pupils started at 5am with morning exercise, acrobatic and combat skills. Acrobatic and dance skills were taught from a young age and singing, gesture and acting were taught at a later age.

Conventions of Peking or Beijing Opera
Originally, Peking or Beijing Opera was performed on square platforms exposed to the audience on three even sides. Eventually a stage with an embroided curtain called a shoujiu became standard and performances could be watched from the front or the back of the stage. Today some performances are watched from one side in a proscenium arch configuration but this is rarer. Peking or Beijing Opera stages are normally square and viewed from three sides. Direction and North, South, east and West are important to the staging of this opera. Most of the audience are always seated South of the stage, therefore, north is the most important direction in Peking opera. Although performers enter from the East and exit to the West, when they move onto the stage they will immediately move to "center north" upon entering the stage. A table and chairs are the normal set items although a city wall or a mountain can also appear on stage. Props and sound effects can be used to indicate other objects, the appearance of a whip indicates a horse and the appearance of an oar indicates a boat.

In front of the curtain, a table normally has all the musical instruments used where the orchestra or Changmian set up in full view of the audience. A performance normally begins with singing accompanied by dual flutes or Shuangshoudi. Sometimes then huqin or string or fiddle playing is then heard. The main musical accompaniment used in Peking is done by the drummers who must be able to accompany singers, actors and acrobatic fighting and battles. The main drummer or huqin player normally can play in many different styles.

Performers strive for beauty in every action. They try to synthesize the different skills of the voice and body. The shapes that the performer forms in the space and on the floor as important as the gestures and patterns created by hands and the voice. All actions and movement has a symbolic meaning. For example, a performer or performers walking in a large circle always symbolizes traveling a long distance. Peking or Beijing Opera is not naturalistic but based on the principle of Mo (which means mime or imitation), but the imitation in Peking or Beijing Opera is suggestive rather than directly imitative. Every action and gesture aims for roundness so sharp angles and straight lines are avoided. A character looking upon an object above them will sweep their eyes in a circular motion from low to high before landing on the object. This also gives three-dimensional movement to the characters and actors which derives from the original three sided and traverse audience configuration. Circular and S-Shaped gestures and movements are encouraged.

Since sets and props are kept simple for most Peking and Beijing Opera, costumes and the colour of costumes is important. Here are some common costume conventions:
-       Emperors and their families wear yellow robes
-       Court officials and high-ranking people wear purple (sometimes a dragon appears on these garments)
-       Middle to high-rank people or people of virtue wear red
-       Low ranking officials wear blue
-       Young characters and lovers wear white
-       Old wear white, brown, or olive
-       Other men wear black

Here is a video-clip from a Beijing Opera piece:
http://www.youtube.com/watch?v=xYWiQ_RnLWE

Chinese Beijing Opera Exercises and Activities
Students experiment with design and technical elements such as symbol, colour and character appropriate to the style of make-up used in Beijing Opera.
The aim of this lesson is to develop understandings of the role of colour in determining an audience’s perception of character. Introduce the Beijing Opera, then explain that the class is going to explore how colour is used in face painting.
Give students make-up designs of two Beijing Opera characters and ask them to colour in the faces. Ask students to write a brief analysis of each character based on their existing understanding of colour associations. Students can even do a performance using a Peking Opera story and cut out the masks they have created and act with them, Students can also do these designs as face makeup.
Here is a link to different Peking or Beijing Opera face and mask designs:
http://www.cnto.org.au/the-culture4-2/beijing-opera.html
Stage Fighting is an interesting part of Peking and Beijing Opera. Students love to practice this. Normally the performers move around one another and do not actually touch or have the sticks actually touch. Students can practice moving around one another with bamboo sticks or long cardboard rolls without actually touching one another. Sometimes sticks are thrown and whole routines are based on this. Watch the following video and have students develop their own stick throwing or stick fighting sequences.
http://www.youtube.com/watch?v=ex8MQuBc3Zc

Posted by Mark Eckersley at 6:43 PM