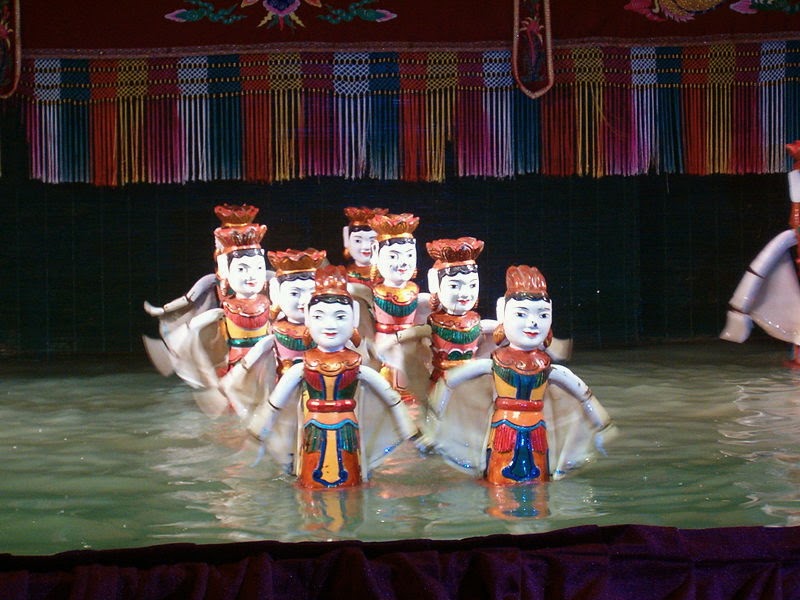 There are many different forms of Vietnamese Theatre but the major four seem to be Hat Boi, Cai Luong, Kich and Mua Roi Nuoc. Mua Roi Nuoc is a water puppetry form that is the oldest tradition of the four. Hat Boi is the most traditional of the three forms and it has an operatic vocal and movement style which draws on Chinese theatre forms like Canjun (Bowers 1960:304). Cai Luong is popular form of theatre in the south and can best be described as a kind of operetta vaudeville (Bowers 1960:306). Kich is a non-musical form which specialists in light comedy. The primary form I will concentrate on is Mua Roi Nuoc.

Mua Roi Nuoc translates loosely as “puppets dancing on the water”. It is a rural village puppet drama form from the Red River Delta region which originated around the 11th century but by the 16th century had developed into the form we know today. Originally it was only performed after rice harvests when to thank and appease local spirits rice paddies were used as the ‘stage’ for plays of thanks and hope. Around the 16th century, stages started to be erected on rice paddies or shallow ponds and wooden puppets on sticks started to be used. Eventually puppets were supported under the water by bamboo rods. A little later the convention of erecting a screen (usually painted with the image of a temple) behind which 6-12 puppeteers were hidden developed. The puppets can appear from either side entrances or from beneath the water itself. Around the 16th century, a traditional Vietnamese orchestra was incorporated using drums, bamboo flutes, gongs and dan bau. This music is largely used in an atmospheric way but it also accompanies the chorus singers who sing the story in a cheo style. The stories in Mua Roi Nuoc are normally local folk tales and legends but some works can include comic routines and even political satire. Here is a video which shows extracts from a performance but also gives some indication of the mechanics and stagecraft of this water puppetry form. https://www.youtube.com/watch?v=GdD0Ep05kb4

Here is a Vietnamese story which can be used for Mua Roi Nuoc water puppetry entitled ‘The Tiger’:

There once was a fisherman who cared for his aging mother. Every evening he would cast his nets into the river, and every morning he would collect the fish that had been caught in them, and this is how they lived.

One morning he discovered that all of his nets had been torn open and were empty of fish. He repaired them but the next day the same happened. Seeing that his dear mother was weakening from lack of food, he determined to spend an entire night hidden in the shadows beside the river and to capture whoever was responsible for this.
The next morning his body was found, lacerated and lifeless, beside the flowing river. To the villagers, this was clearly the work of a tiger — the most feared of animals! They walked in fear.

The fisherman's mother grieved profoundly for her only son, and visited his grave daily. One evening, lost in grief, as she was returning home from the graveyard she came upon a tiger. Distraught as she was, she challenged him directly: "Are you the one who killed my son? Will you do for me as my son did?" The tiger nodded slightly, but the woman simply turned her back on him and slowly proceeded home.

The next day, and every few days after, she found a deer or a boar laid before the threshold of her house. For two months this went on before she decided to find out who was being so generous to her. She stayed awake the whole night until, toward dawn, she saw the same tiger she had spoken to near the graveyard come along dragging fresh game, which he laid at her door. She invited him in, and it wasn't long before a friendship developed between them.

And so it was until the woman lay dying. "Please promise me you will no longer kill people," she said. The tiger hung his head low and nodded. He remained by her side all through the night. Soon afterwards the villagers found enough wild game piled before her front door to pay for a big funeral. And during the funeral the forest was filled with the roaring of a tiger.