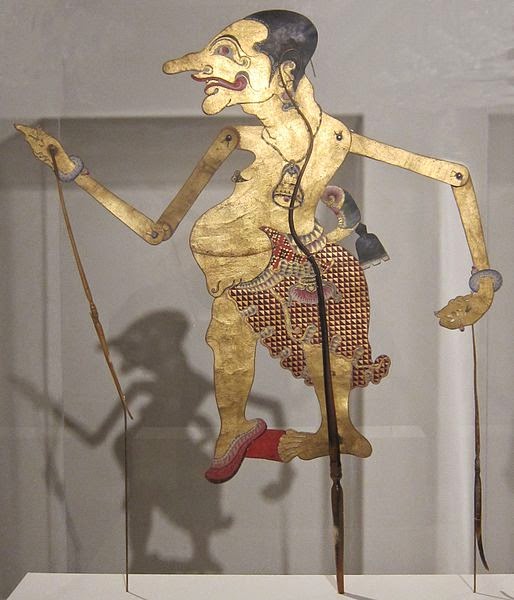 Obviously there are a great many South East Asian theatre forms. Here I will concentrate on the Indonesian Wayang Kulit or Indonesian shadow puppetry and the narratives of the Ramayana epic simply because they it is an easy form for students to research and a simplified version of the puppets is easy to make.

Shadow puppets are evident in Malaysia, Brunei, Thailand, Burma, India and a little in China but not as famously as in Indonesia or in particular Java and Bali. The form probably originated in Indonesia at some point when dancing of the Ramayana and other stories with real people was frowned upon or a ban was put on human performances. The first recorded performance of a wayang is in 930 CE and another reference is made to a wayang in 1035 CE when an illiterate wayang master is described as “…steadfast and just a wayang  screen away from ‘Mover of the World’”.

Some teachers and students may have seen Wayang Kulit hanging as wall decorations and though you may never have been to Indonesia.

Here is a basic outline of the four basic forms of wayang:


The rest of this unit will concentrate on the Wayang Kulit. Each Wayang Kulit puppet, of which there can be well over 150 in any one narrative, has a definite character and role within the story. These characters are easily identified by their shape, gesture, voice and movement. All Wayang Kulit characters have distinct voices, faces, shapes (body & face) movements/gestures and colours and fingers, eyes and teeth.

Dalang
The dalang or puppeteer is of great importance. The word 'dalang' comes from the Javanese 'Ngudal Wulang', which means a spreading of education. His function therefore, is similar to that of a teacher. He is very highly regarded and in Bali is thought of as being almost like a priest. There are many skills at which he must become proficient, not only must he be a skilled puppeteer but he must also be able to describe and evoke a scene. He must be familiar with all of the music and stories and he must be humorous. As many as thirty years may be devoted to study until he is ready to give a professional performance.

Wayang Kulit Characters
There are over 150 different characters in any given Wayang Kulit performance but here are some of the main characters in the Ramayana narrative.
RAMA - The good Prince
LAKSEMANA - Rama's brother
SINTA - Rama's Princess bride
RAHWANA - The evil king from the Alengka palace
MARCIA - Rahwana's cousin and assistant
JATHAJU - King of the birds (also know as the Garudal
HANUMAN - The good monkey General
SEMAR - A wise old man
BAGONG, GARENG & PETRUK - comic clowns (usually Semar's sons)
RAKSASA - The giant/s

OR I suggest that students make their own simple puppets by copying designs from photos of proper Wayang Kulit puppets. Alternately you can photocopy the real puppet. You can find these pictures in most books and on the Internet. Here is a website with some ideas and paper puppet templates:
http://www.prm.ox.ac.uk/pdf/edweb/Shadow%20Puppets.pdf

What You Will Need

Tie the wool to the end of the skewer and secure it with a bit of tape and then use the loose end to tie around the splint pin in the puppet’s hands. Be sure to leave wool loose near the hand in order to free up the movement.
Work the splint pins around in their positions to loosen up the joints so as they flow and move freely.

Tape two skewers or a ruler to the back of the puppet to make a prop rod.

Ramayana and Stories to Use
The Ramayana dates back to circa 200CE and has historical, social, spiritual, political and contemporary contexts which are all still included in the narratives and their performance. The Indonesian Ramayana is actually the Indonesian version of the famed Indian classic Ramayana the original epic, however, on its arrival on Indonesian soil encountered a vigorous, already blooming indigenous culture which in the course of time has reshaped and rebounded it into its present format. This present Indonesian form of the epic has become so deeply rooted into Indonesia's natural heritage and forms part and parcel of every day life, though not performed as frequently these days due to the advent of television.

Ayodhya Kanda – A Story to use for Wayang
After Rama and Sita have been married for twelve years, an elderly Dasharatha expresses his desire to crown Rama, to which the Kosala assembly and his subjects express their support. On the eve of the great event, Kaikeyi—her jealousy aroused by Manthara, a wicked maidservant—claims two boons that Dasharatha had long ago granted her. Kaikeyi demands Rama to be exiled into wilderness for fourteen years, while the succession passes to her son Bharata. The heartbroken king, constrained by his rigid devotion to his given word, accedes to Kaikeyi's demands.

Rama accepts his father's reluctant decree with absolute submission and calm self-control which characterises him throughout the story.He is joined by Sita and Lakshmana. When he asks Sita not to follow him, she says, "the forest where you dwell is Ayodhya for me and Ayodhya without you is a veritable hell for me.“ After Rama's departure, king Dasharatha, unable to bear the grief, passes away. Meanwhile, Bharata who was on a visit to his maternal uncle, learns about the events in Ayodhya. Bharata refuses to profit from his mother's wicked scheming and visits Rama in the forest. He requests Rama to return and rule. But Rama, determined to carry out his father's orders to the letter, refuses to return before the period of exile. However, Bharata carries Rama's sandals, and keeps them on the throne, while he rules as Rama's regent.

Further Reading and Resources on Indonesian Drama and the Wayang Kulit