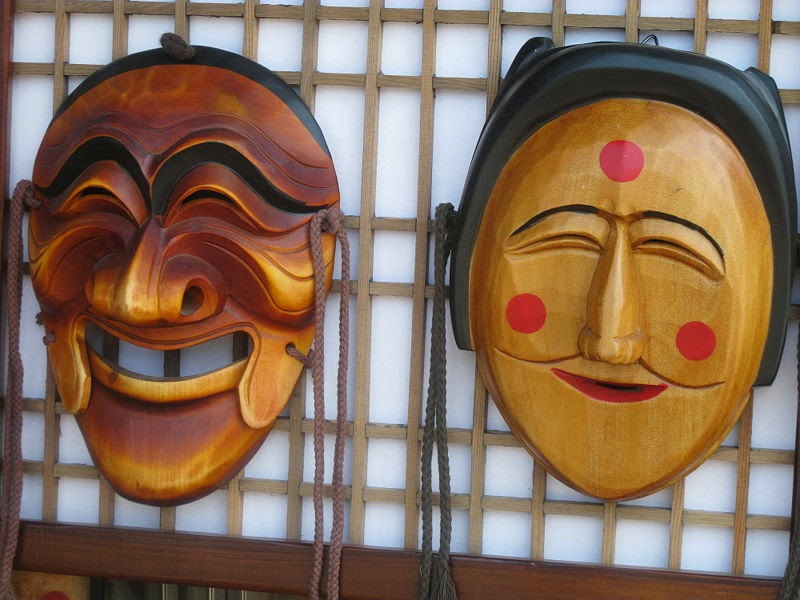 Korean Drama has its origins in shamanic ceremonies, dance dramas and performance rituals dating back to the first century BC. In Korea, these are generically known by the Korean words for playing Nolum (놀음) and Yeonhee (연희). The Korean drama Ch'oyong which developed during the Shilla Kingdom (57 B.C.-935), seems to one of the first forms of Korean Drama. It was a form which combined stories, musical accompaniment and dramatic dance movements and many of the elements of Korean drama.
Mask dance dramas, an integral part of traditional Korean drama, are often known under regional names such as ‘tachchum’, ‘sandaenori’, ‘ogwangdae’ and ‘yayu’. Some mask dramas were developed during specific eras such as the ‘Cheoyongmu’ life celebration dance drama and ‘Hyangak’ five-mask drama (both developed during the Silla Kingdom).

Hahoe T’al – Origins of Korean Drama
The Korean traditional folk dance drama form Hahoe Pyolshin-gut T'al-Nori (sometimes known as Hahoe T’al) is one of the oldest and most enduring folk drama forms. This shaman-based masked dance drama has its origins in the 12th century AD. The development of this form saw the emergence of definite The form derives its name from Hahoemaul, Andong, Korea where the Hahoe T’al wooden performance masks are made.

Traditional stories tell the story of the birth of Hahoe T’al when a talented young mask maker, Ho-dory-ong, received a revelation in a dream from the village god to confine himself to a secluded place and devote himself to making a complete set of 14 masks. It is told, that his girlfriend trying to capture a glimpse of his mask making, disturbed him and the instant he was seen, he began spitting up blood and he died on the spot. It is said that this is the reason why the last mask, Imae, is an unfinished mask and does not have a chin.

In Korean, masks are called ‘Gamyeon’ which literally means ‘a false face’. The term ‘T’al’ (mask) has the double meaning of ‘a disaster’ or ‘to remove a bad thing’.  Traditionally, T’al drama was seen as a way to remove potential disaster. Hahoe masks are normally made of alderwood, covered with Korean paper made from tak-namu (paper made from mulberry pulp), and then lacquered heavily and painted with natural pigments. Village masks are often considered sacred and kept in holy
place between performances which prior to 1928 were sometimes only performed every three, fives or ten years depending on the revelation of local rituals and the worship of goddesses. In some regions, masks were used once and burnt after they were used in a performance. In present day Korea, many performances seem to happen now in the New Year or in early January. Folklore alleges that a person could not go to heaven unless they had seen at least one Hahoe performance in their lifetime.

The greatest contribution that the Hahoe dance drama has made to Korean drama is its development of definite allegorical or archetypal characters. Of the original fourteen characters, eleven characters remain. These are:

Hahoe drama integrates shaman rituals and popular entertainment and the dance drama was performed to bring peace and prosperity. The storylines are often comic parodies of village life, status and social tensions of the village and family life. Hahoe dance drama is normally accompanied by Nong-ak, one of the oldest forms of Korean performance music and was traditionally played at important rice festivals by a village percussion quartets made up of a Puk (large drum), a Changgo (long drum), a Kkwaenggwari (small gong) and a Ching (large gong).

Sandae Mask Drama
The use of movement, masks and musical accompaniment are the common elements of traditional Korean drama from rural to shamanic to royal performances. The Sandae drama developed during the Koryo Dynasty (918-1392) started to develop more definite dramatic elements.
Although the sandae existed prior to the 14th century, the Choson Dynasty (1392-1910), saw it become a large part of both rural and courtly life. The sandae is primarily performed onstage by masked actors with songs and dances but each drama has definite story and dialogue and monologues. Like much of Korean drama, sandae often used satire of the aristocratic yangban and Buddhist priests classes.
Sandae dance-dramas mostly consist of ten acts and thirteen scenes each of which concentrates on one character and their attributes such as “The Dark-Faced Monk” and often involves a love or power triangle. The all-male cast use twenty-four masks and puppets and normally perform on makeshift open air stage erected in public spaces such as village squares. Normally the shows would begin after sunset and continue well on through the night. Present day shows tend to be shorter and concentrate on just a number of characters and some of the simpler storylines.

Talchum (탈춤) Mask Plays
Although the origins of Talchum mask plays probably date back to the Silla kingdom (57 B.C. – 1392 A.D.), it is not until the Joseon Dynasty (1392-1910) that Talchum mask dance plays as we know them start to become popular.
Mostly performed at local festivals, these dramas were normally performed by peasants and farmers and often explored larger social themes such as the harshness of life under dishonest rulers, moral commentary on the debauchery of some of the monk class, domestic drama on the relationships between wives, husbands and concubines, and moral parables which advocated living a virtuous life. About thirteen different forms of Talchum mask dramas still exist of which Songpa Talchum and Bongsan Talchum are the most popular.

The masks themselves are versatile and symbolic. A raising of the chin normally makes a mask more cheerful while a dropping of the head or chin can make a mask look more evil and menacing. In some regions, a mask painted half red and half white can symbolize an illegitimate son while a disfigured or asymmetric mask can signify a person with smallpox or leprosy. The use of white in masks often symbolizes youth or purity and black usually signifies age. The red in masks like Choegwari’s (the old Buddhist monk) may seem demonic but in fact in Korean culture this seems to represents an over-indulgence.
The performances themselves would now and then have audience participation and sometimes the resolution of a play could be determined by the audience (normally the audience advocated the death of an aristocrat). Some modern dance forms set to contemporary music use talchum as a dance form. 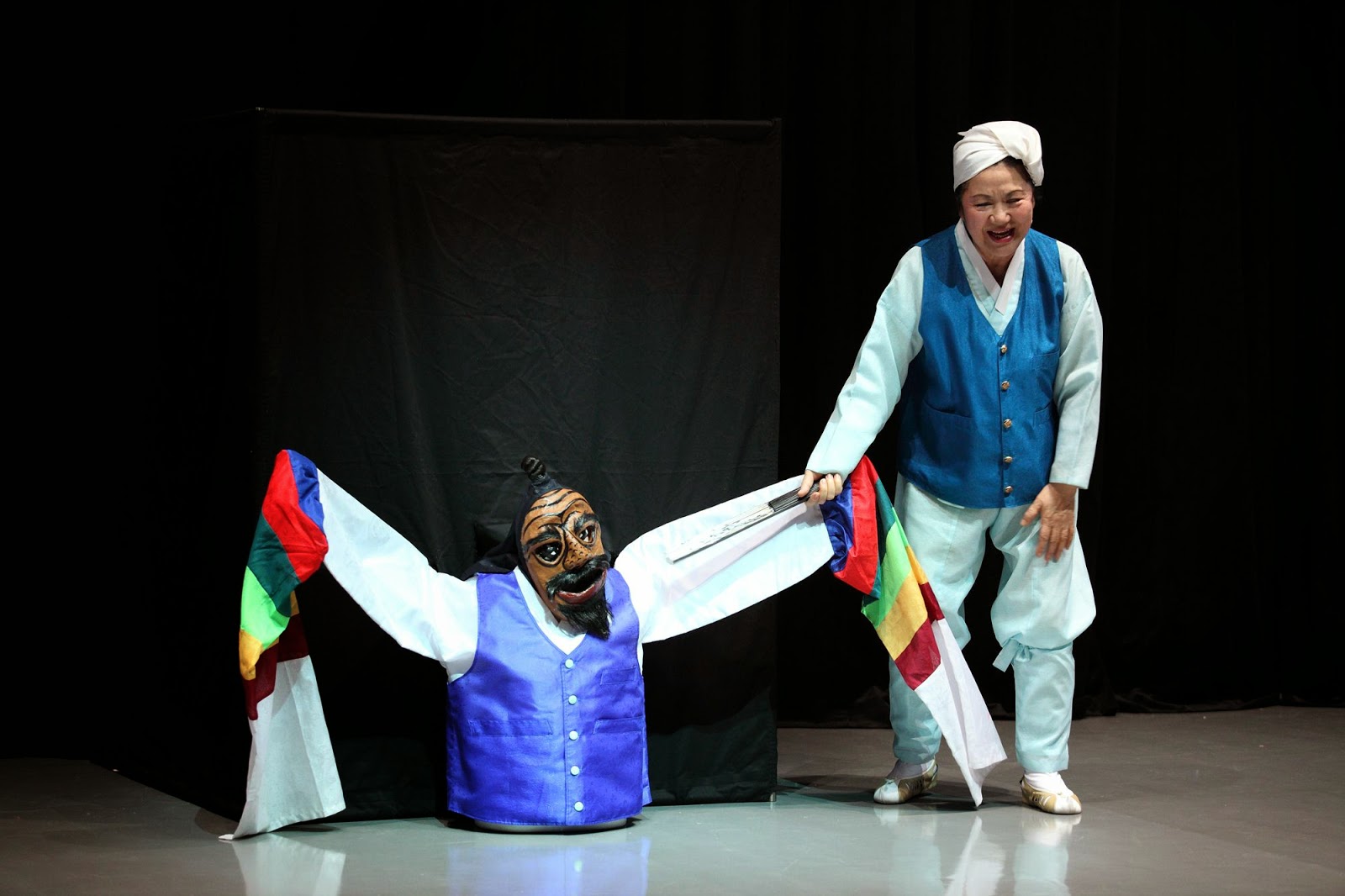 Unlike other Korean Drama, Baltal or Baltalnori is a puppet show drama played with the feet. Combining dramatic elements of both mask drama and marionette drama, Baltal is believed to have its origins in the 19th Century in the Gyeonggi-do Province. In this drama, a puppet or mask (tal) is normally put on the foot (tal) and some of the other movements are controlled by bamboo poles. Today, this puppet theatre is performed on a boxed three-sided black curtain with a split in the middle for the foot puppet and a stage two metres by one metre where the baltal master lies inside and sticks his feet outside.

Allegedly, baltal is said to have derived from the Korean namsadang puppet shows of itinerant traveling players which were located around Anseong. Initially, baltal were performed with a scarecrow-like head mask being put on the foot with the arms being moved by strings which are attached to the puppet’s hands. The tradition of bamboo pole system for hand movements was probably developed by the Korean puppeteers Nam Hyongwoo or Lee Dong-an who would attach bamboo poles to the puppet’s hands and control the poles with transparent strings which come over the backdrop and are controlled by the puppeteer from behind the screen.

Baltal normally involved character based plays and folk stories accompanied by songs and satirical dances and jokes. Often the stories are criticisms of society and its leaders. Musicians often sit on either side of the stage and often in a trio or quartet playing any number of instruments including a two stringed Korean violin called a haegeum, two wind instruments (the jeodae flute and the piri), a large Korean kettle drum (called a buk), a small hand drum (buk), a kkwenggwari (a small hand-held gong) and/or an hourglass-shaped drum (called a janggo).

The puppeteer and the puppet characters often interact with the musicians, an actor (often a woman dressed in yellow jacket) or a narrator (who is often dressed in grey trousers and uses a fan. Often the story and dialogue is interspersed with songs, character dances, dialogue, songs and satirical jokes.

Pansori Song Drama
Pansori is a form of storytelling song drama which became popular in Korea in the 19th century combining vocal, percussive and narrative elements. The term pansori derives from pan which in Korean means “a place where a crowd gathers” and sori which means “sound”. The stories are handed down orally and a full traditional story or madang (마당) can take up to three to nine hours to complete and is made up of dialogue or descriptive speeches called aniris (아니리) and song cycles called changs (창). Today five of the original twelve madangs have endured. These are Chunhyangga, Heungbuga, Jeokbyeokga, Simcheongga and Sugungga.

In a pansori performance, the gosu or musician starts a specific rhythm and a specific vocal tone called a chuimsae. Often the beat used is a 4:4 meter punctuated by pauses and exclamations. Then the kwangdaei or singer enters, and stands with a folding fan which opens up and closes in specific gestures and movements called pallim to announce the change in each scene and mood changes within the song drama. The kwangdaei sings aniri or sori with changes, phrases and clauses accentuated by the gosu using olssu, chohchi, chohta or olsigu. The gosu sometimes even takes on the beat and tones of characters in the story sung by the kwangdaei. The audience sometimes encourages or suggests chuimsae  in the way that a sports crowd starts or maintains a chant.

Baltal Exercises and Activities
Students prepare in groups to present a Korean Folktale as a Baltal foot puppetry piece. Students should start on their backs on the floor with socks on and their feet in the air. The teacher gets the students to draw various shapes in the air with their socked feet – a horizontal line, a vertical line, a curve, a circle, a figure eight etc. Next students attempt to show different emotions with their feet as if the feet were faces i.e. happiness, sadness, anger, excitement, shyness etc. Then students practice having one of their feet talk to the other as if they were characters. Students can then even draw faces on old light coloured socks to develop puppets in a short simply way. Students can also make elaborate foot sock puppets of different characters at this point.

A small fabric screen can be set up or a table can be turned on its side to act as a foot puppet theatre. Students can even do this with a separate person reading out the story while they act it out with Baltal puppets which they make themselves. See some of the links below to Korean Folk stories.

Other Korean Drama form activities
Other forms of Korean traditional drama can be explored with some of the links below. Students can even make, create and paint their own Korean drama character masks for various Korean drama mask forms

Posted by Mark Eckersley at 1:35 PM