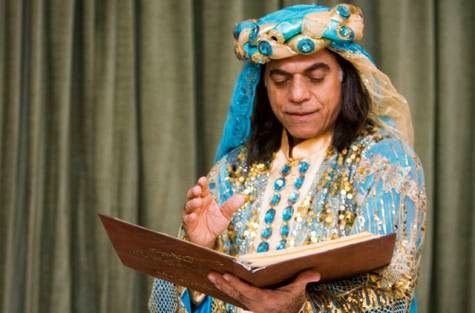 For centuries after the Qur’an appeared, the Arabian Peninsula and the whole region of the Middle East started to become a source for legends, fables, tales and a rich storytelling tradition. Throughout the 8th century A.D. (from about 100 in the Islamic calendar) a rich history of acting out of stories and storytelling starts to appear throughout Arab cultures.

Ta'ziyah is seen as one of the earliest forms of passion play. One of the oldest Arabic Passion Plays still performed today by some Shi'a communities during the month of Muharram, involves the retelling of the story of the death of the Prophet Muhammad's grandson, Hussain, at the battle of Karbala in A.D. 680. Records of Ta’ziyah Passion plays date back to A.D. 750 and were sometimes done in long performances of forty to fifty scenes depicting the life of Hussain which sometimes had a male and female chorus of singers who mourn and wail after dramatic moments in the performance.
By A.D. 900, elements of these Passion Plays had combined with rich storytelling traditions to produce one of the most revered traditions of Arabic oral storytelling - the Hakawati. The Hakawati  involves an intricate, complex and rich form of storytelling or narrative drama with an intricate narrative structure of stories within stories, a symbolically and motif-rich narrative style which meanders in and out of stories. In this form of drama and storytelling, the Narrator or storyteller begins one tale, and midway picks up another tale and sometimes a third or fourth. Allegory, folk tales, satire, music and a visual elements such as symbolic sweeping gestures and emotional facial expressions are all aspects of this performance narrative drama form. Al Hakawati is the Arabic name given to the storyteller of these stories and often their storytelling is filled with expressive words and folktales to remind people of better times or help them escape into the world of the past or of fantasy. Here is a video of an Al Hakawati. Al Hakawati - The Storyteller

One of the major collection of stories which arises from the Hakawati traditions is One Thousand and One Nights (translated as some stories in English first in 1706 as Arabian Nights). As an overall story, One Thousand and One Nights, probably came from collections of stories over many years and the inclusion of stories from Arabia, Persia, India, Egypt and Mesopotamia  show that the rich narratives come from the interaction between these cultures in rich storytelling and story enactment and performance. Much of the narrative of this piece is framed or revolves around the Shahryar and his wife Scheherazade who tells stories for one thousand and one nights to prevent Shahryar from killing her. The stories of Aladdin, Ali Baba and Sinbad all first appear in this sequence.

One Thousand and One Nights, like many stories originally told in the Hakawati traditions, switches genres and styles. It also uses a frame story device, a technique or narrative framing device where a character narrates or tells a story within a story. This technique probably originally derives from Indian culture and Sanskit literature and storytelling techniques. This technique goes further in One Thousand and One Nights and the device of embedded narrative is used where stories within stories are told or revealed. Sometimes the Narrator takes on a didactic standpoint and the stories are told as parables or didactic analogies. Dramatic imagery and the use of metaphors suggest that this style of dramatic storytelling would have involved the use of descriptive detail, mime, symbolic gesture and even the transformation of props, costume and set.
The six most common aspects of Hakawati seem to be:

By the 13th century A.D. the expense and commitment of fighting against the numerous Christian Crusades had started to bring its toll on much of the Islamic World. Written traditions in literature started to become more popular in Arabic cultures and Hakawati and other dramatic oral storytelling traditions started to wane in their importance. These traditions have recently been reinvigorated by new interest in many Arab speaking countries such as Egypt, Lebanon, Syria and many countries in the Gulf Arab states.

Mime and pantomime also are strong stylistic elements in Arab Drama. Islamic scholar Lois Ibsen Al Faruqi has detailed the abstract and mime elements in Arabic Theatre and dance forms since many Arabic theatre and dance forms are largely devoid of narrative elements (Rubin 1999). Egypt in particular, has a long history of mime and pantomime since the times of the Pharaohs and Ancient Roman times. In modern times, Egypt's best known exponent of mime is mime artist Ahmed Nabil who is over 80 years old. He started training in Alexandria in Egypt in the 1960's and he has trained and inspired many young Egyptian mime artists such as Mohamed Abdalla, Mostafa Hozain and Oscar Naqdi who have kept these traditions alive in Egypt. Essam Ali is an Iraqi mime artist who is based in Amman in Jordan who also has performed throughout the Middle East.

Modern Arab drama has also developed in many countries as a way to tell modern Arab stries and sometimes to explore the difficult themes of what it is to be an Arab and a Mulsim in modern societies. Of particular interest is the modern Arab-American drama which includes practitioners from Palestinian, Egyptian and Lebanese backgrounds. Ameen Rihani's Wajdah (1908) is considered by many to be the first Arab American play written in English (Najjar 2015, p.10).

Reynolds, D. 2006. “A Thousand and One Nights: a history of the text and its reception” in The Cambridge History of Arabic Literature Vol. 6. Cambridge University Press. Cambridge, U.K.

Mime in the Middle East

Questions and Areas of Study

1.    Discuss the style of Hakawati as a form of dramatic storytelling.
2.    What styles within a set of stories like One Thousand and One Nights interest you the most or have the most dramatic potential?
3.    What do you think was the role and functions of women within the performance and stories of hakawati? Does it surprise you that women sang in performances and figure prominently in stories such as one Thousand and One Nights?
4.    Although Arabic culture is monotheistic and religious when hakawati forms develop, chance and destiny feature strongly in the form and the stories. How do you unify these seemingly disparate elements or how do you think the original audiences coped with these seemingly disparate features?
5.    The style of some hakawati stories such as One Thousand and One Nights is distinctive and complex. How effective do you think this is as a storytelling styles? Can the separate narratives work against one another as well as with one another?

Posted by Mark Eckersley at 8:45 PM