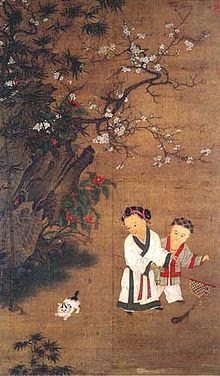 Chinese drama has its origins during the period of the Six Dynasties from the Eastern Wu Dynasty (222-280 AD) through to the Chen Dynasty (557-589) with the Canjun Opera. This is known as an era of relative peace and decentralized governance compared to the turbulent previous Han Dynasty Period characterized by centralized government. As a dramatic form, Canjun Opera was originally a comic musical drama form involving initially two performers – one who played the ‘straight man’ (usually a corrupt court official) and the other playing the ‘comic character’ (usually a court jester or comic fool). The dialogue was sung and usually involved a comic interlude or response format. Eventually more characters were added and the plots became more complex and involved the acting out of the incidents recalled or related.

By the Tang Dynasty (618-907 AD), Canjun Opera had developed into a more composite performing arts form, involving singing, acting out of comic sequences, music which accompanied danced or mimed sequences and the use of some elaborate costumes. Much of the early Chinese Canjun Opera was performed only to male nobles. The form involved primarily males performing although some documents from about 750 AD suggest that some female singers performed in these operas in later times.

Mostly light folk stories were enacted, mimed and sung. Although sometimes topical stories and people were imitated and portrayed. One story tells of how an important actor known as Meng, used his influence and potrayed local people and events in a Canjun Opera. Sun Shu'ao, one of the Chu Kingdom's high officials and on whom the king of Chu relied heavily, died and his poverty-stricken children went hungry. Seeing this, actor Meng dressed up as Sun and imitated him. Startled, even the king thought Sun had come back to life. In showing his sentiment for Sun, the king ordered Meng to hold Sun's former position but Meng refused, saying that he could not see any good in being an official because although Sun had been honest during his lifetime in performing his duties and did not seek any private fortune, Sun's family still went hungry. Realizing the actor's true intent, the king sent his solicitude to Sun's family immediately and raised Sun's boy to a high-ranking level. This story might have been the beginning of the stage performance of opera in China, and the phrase "actor Meng in costume" was thereafter used to refer to the performance of opera.

Later in the Tang Dynasty Canjun Opera became more known for its comic representations. Sometimes minor officials were punished by being forced to watch a specially made Canjun Opera where they were mocked. Some officials were even forced to dress up as woman in a Canjun so that they were mocked. The suggested structure of many Canjun of the early and middle period is that they involved two actors. Later performances involved more complex plots and more characters. The main purpose, however, was still to satirize and reprimand through mimicry, amusing gestures and satirical dialogue.

Emperor Xuanzong of the Tang Dynasty, although a man of daring strategy, had a musical temperament and was very fond of singing and dancing. He established a special institute called "the Pear Garden (Liyuan)" as a place to train actors. Moreover, he selected actors personally, gave them guidance and even performed on stage himself. This theatrical troupe was actually the first opera school in china. Actors in later times referred to this theatrical circle as "the Pear garden" and called themselves students of the garden. In the past, a statue of the founder of the opera could usually be found in theaters where the actors could pay their respects.

The folk songs, dances, the genre of talking and singing, and comic plays showed tendencies of merging, and "a variety play (Zaju)" came into being, which became further refined in the Yuan dynasty; "Yuan Zaju" embodied the peak in Chinese opera history. Sometimes bells were played as a musical accompaniment to the stylised dances and folk songs. Here is a video of bells performed in the style of the period.
outube.com/watch?v=zhcCSeRj2PU&feature=youtu.be&fbclid=IwAR1gZgDGG9Vz5MOKibhygHUcx5ipfqwtQ4oSNttgC8nOusaj_HHmgsHtccE
In the Yuan Dynasty, since scholars were the least respected in society and their social status was no higher than that of beggars, they had no opportunity to become officials through an academic route and had to focus their talents on artistic endeavors such as opera, poems, songs and performances. The combination of entertainment and education, with special emphasis on moral inculcation and cultivating a sense of national duty, is one of the main features of Early Chinese drama as shown in Canjun Opera. The street opera sometimes performed in Chinese cities and towns probably shows performance closest to the Canjun and early Chinese drama. Here is a video which gives a sense of early Chinese theatre.
https://www.youtube.com/watch?v=-zdaPVoX5VY
References
Oovene, P. (2010). 'Chinese Operas on Stage and Screen: A Short Introduction'. The Opera Quarterly. 26 (2-3): 181-199. Retrieved from Project Muse.
Jin Fu (2012). Chinese Theatre (3rd edition ed.). Cambridge University Press.
Tan Ye (2008). Historical Dictionary of Chinese Theater. Scarecrow Press. Hong Kong.
Wang Kefen (1985). The History of Chinese Dance. China Books & Periodicals, Beijing.