Boal and the Theatre of the Oppressed

Boal and the Theatre of the Oppressed 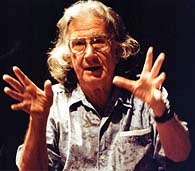 In pairs, the students rehearse a scene that shows Power and Oppression. One student is the Oppressor and one is the Oppressed. Homework, Peer group issues and playground issues work well for school students. For college students, issues of homelife or life in a shared house or dorm work well. The participants decide who will play each role first and mutually agree on a conflict scenario before beginning the improvisational scene. The oppressor can reply in the scene with an expression of an attempt to express their opinion with a statements such as “Yes, but…”

Once the students grasped the idea of oppression, larger social scenarios can be attempted. Then the students can try to show the scenario in three still images – The Situation, the Cause and the Solution. Initially the Solution presented in the scene of the act of Oppression should be shown. The audience then act as spect-actors to suggest, or sculpt the actors or come up and replace an actor to show a different solution that would end the Oppression.

Boal, A. 1992. Games for Actors and Non-Actors, trans. A Jackson, London: Routledge.

Boal, A. 1995. Rainbow of Desire: The Boal Method of Theatre and Therapy, trans. A Jackson, London: Routledge.

Theatre of the Oppressed Laboratory
http://www.toplab.org

Posted by Mark Eckersley at 2:46 AM