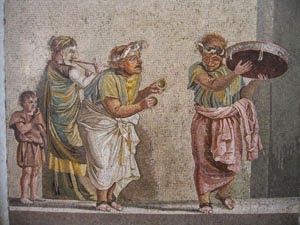 Ancient Roman Theatre can’t easily be categorized as one style or period of theatre. One reason for this is that it starts as a performing art around the 300 BC and ends around 400 AD included a great diversity of forms from street theatre to circus to the comedies of Livius Andronicus and Plautus to the Roman adaptation of Greek stories evident in the comedies of Terence to the ‘comedy of manners’ of Gaius Maecenas Melissus.
Ancient Rome probably had its own native storytelling and rituals from very early times, but the Hellenic or Ancient Greek traditions seemed to start to influence Ancient Roman culture from about the late fourth century BC and developed into what we know of as Ancient Roman Theatre.
We have early records from the historian and philosopher Livy who describes Etruscan actors. Sometimes these performances are described as pre-Roman theatre performances. The first record we have of what we have come to know of as Roman Theatre are the plays and theatre of Livius Andronicus in about 240BC. 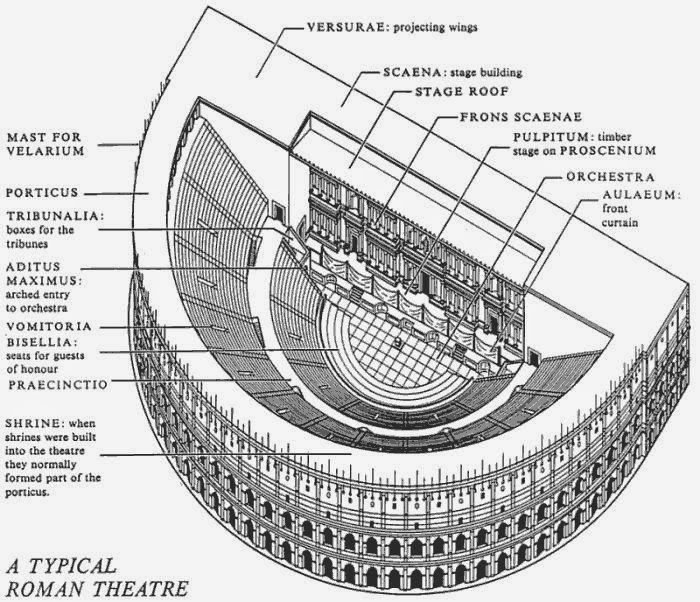 Plautus was prolific and wrote around 50 plays. Some of the most famous plays which have survived are Amphitryon, Bacchides, The Casket Comedy, Mercator and Persa. A good sense of his comedy is probably evident in the modern play and film A Funny Thing Happened on the Way to the Forum.

The most famous Ancient Roman playwright for tragedy was Seneca (4BC-65AD). He adapted plays from Ancient Greek playwrights. His plays pushed the boundaries of Ancient Rome and in 65AD he was forced by Nero to commit suicide due to offensive political and social commentary in one of his plays. Seneca agreed to this and slashed his wrists but this proved too slow and painful so Seneca called for poison. This also didn’t kill him, so his servants placed him in a hot copper bath and the steam suffocated him to death.
Ancient Roman Theatres


Ancient Roman theatres drew on the influence of Ancient Greek theatres and have much in common but there are many differences such as how they each constructed theatres and the shape of the Orchestra (see video Technology and Revolution in Roman Architecture). Probably the first permanent Ancient Roman theatre was the Theatre of Pompey and most Ancient Roman theatres based their structures and design on this theatre.Roman theatres were normally built on their own foundations, not into a hillside although there are exceptions (such as the Ancient Roman theatre in Petra in Jordan). In arena was quite high to avoid the noises of city life to enclose the performance so that the audience could not see the city or outside life however the audience were seldom quiet like modern audiences and many devices such as masks were used to make it easier for an unfocused audience to easily understand the performance.

Use of Masks and Costumes in Ancient Roman Theatre
Masks were one of the central conventions used in Ancient Roman Plays and the Roman Theatre. The masks were full head masks and an actor's entire head was covered by his mask. The designs of the mask was quite simple and they were made from were made cheap materials such as linen or cork. They had big holes for the mouth and the eyes. The masks were large and portrayed exaggerated expressions which could be seen from the back of the theatre so the audience could tell how the character was feeling and the mask conveyed simple emotions in its expression such as happiness, sadness, regret or fear. The masks were color coded, brown for men and white for women. Later Ancient Roman Comedy used half masks for certain characters.

The costumes were simple and colour was the major feature used to distinguish between characters and character types. Purple was used for rich male and female characters (women were mostly forbidden from acting so men played female parts). A red toga was used to represent a poor character and a striped tunic was used for a boy (sort tunics normally showed a character was a slave).

Adulescens – the young, love-struck and not too brave lover.

Senex – normally the overly strict father or the miser. He sometimes has a stick or staff.

Leno – the amoral deviant. Sometimes owns a brothel or house of disrepute.

Miles gloriosus – the braggart soldier (the precursor to Il Capitano in the commedia del arte) is a character that is especially familiar today.

Virgo - (young maiden) is the love interest of the adulescens, but does not get much stage time. She is beautiful and virtuous but sometimes a little dim.
Ancient Roman Theatre Exercises and Discussion
1.    Why did Ancient Roman Theatre borrow so much from Ancient Greek Theatre?
2.    Why did Comedy become more dominant and popular in Ancient Roman society and cultural identity?
3.    Below is a translation of a speech from Plautus’ play The Casket Comedy. Try different ways of doing this speech using a variety of techniques from direct audience address through to acting styles based more on gestural acting.

ALCESIMARCHUS: I do believe it was Love that first devised the torturer's profession here on earth. It's my own experience--no need to look further--that makes me think so, for in torment of soul no man rivals me, comes near me. I'm tossed around, bandied about, goaded, whirled on the wheel of love, done to death, poor wretch that I am! I'm torn, torn asunder, disrupted, dismembered--yes, all my mental faculties are befogged! Where I am, there I am not; where I am not, there my soul is--yes, I am in a thousand moods! The thing that pleases me ceases to please a moment later; yes, Love mocks me in my weariness of soul--it drives me off, hounds me, seeks me, lays hands on me, holds me back, lures, lavishes! It gives without giving! beguiles me! It leads me on, then warns me off; it warns me off, then tempts me on. It deals with me like the waves of the sea--yes, batters my loving heart to bits; and except that I do not go to the bottom, poor devil, my wreck's complete in every kind of wretchedness! Yes, my father has kept me at the villa on the farm the last six successive days and I was not allowed to come and see my darling during all that time! Isn't it a terrible thing to tell of?

4.    Here is a translation of a speech from the character of Cassandra in Seneca’s play Agamemnon. Try acting this in a number of different styles from representational to declamatory.
CASSANDRA:
Where am I? Fled is the kindly light, deep darkness blinds my eyes,
and the sky, buried in gloom, is hidden away.
But see! with double sun the day gleams forth,
and double Argos lifts up twin palaces! Ida's groves I see;
there sits the shepherd, fateful judge midst mighty goddesses.
Fear him, ye kings, I warn you, fear the child of stolen love;
that rustic foundling shall overturn your house.
What means that mad woman with drawn sword in hand?
What hero seeks she with her right hand,
a Spartan in her garb, but carrying an Amazonian axe?
What sight is that other which now employs mine eyes?
The king of beasts with his proud neck, by a base fang lies low,
an Afric lion, suffering the bloody bites of his bold lioness.
Why do ye summon me, saved only of my house, my kindred shades? Thee, father, do I follow, eye-witness of Troy's burial;
thee, brother, help of the Phrygians, terror of the Greeks,
I see not in thine old-time splendour, or with thine hands hot from the burning of the ships,
but mangled of limb, with those arms wounded by the deep-sunk thongs; thee, Troilus, I follow, too early with Achilles met; unrecognizable the face thou wearest, Deiphobus, the gift of thy new wife.
'Tis sweet to fare along the very Stygian pools; sweet to behold Tartarus savage dog and the realms of greedy Dis!
To-day this skiff of murky Phlegethon shall bear royal souls, vanquished and vanquisher.
Ye shades, I pray; thou stream on which the gods make oath, thee no less I pray: for a little withdrawn the covering of that dark world, that on Mycenae the shadowy throng of Phrygians may look forth.
Behold, poor souls; the fates turn backward on themselves.
They press on, the squalid sisters, their bloody lashes brandishing;
their left hands half-burned torches bear; bloated are their pallid cheeks, and dusky robes of death their hollow loins encircle;
the fearsome cries of night resound, and a huge body's bones,
rotting with long decay, lie in a slimy marsh.
And see! that spent old man, forgetting thirst,
no longer catches at the mocking waters,
grieving at death to come;
but father Dardanus exults and walks along with stately tread.