A Matter of Style - Ancient Mesopotamia & Egyptian Theatre and Performance 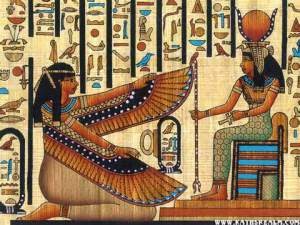 The earliest written drama in the world that we have evidence for is a description of a performance on the banks of the Nile from about 2500 BC. A stone tablet in a German museum and contains the sketchy description of I-kher-nefert (or Ikhernofret), and describes an early Egyptian Passion Play. Like modern Passion Plays or the Persian Passion Play of Hussein, its primary function was probably to act out and make real to people the stories, sufferings and triumphs of Gods.

Osiris was the central divine figure in Ancient Egyptian Passion Plays. Osiris was a legendary historical ruler who ruled wisely but was murdered and his body was cut in pieces and the pieces scattered separately. His wife, Isis, and his son, avenged his murder, gathered up the pieces of his body for pilgrimage relics, won back his throne and established the cult of Osiris-worship. From records, we assume that the Osiris Passion Plays were performed in his memory once a year in the sixteen provinces of Ancient Egypt but we have evidence that performances took place in Abydos, Busiris and Heliopolis from the twelfth to the thirteenth month (Khoiak) and would involve the ritual scattering of Osiris’ limbs and their reconstitution or joining.
The style of performance was probably a combination of ritualistic and realistic. Ancient Greek historians tell of actor-warriors dying of wounds they got from battle and revenge recreations. The performances were part religious and part pageant-like re-enactments. The oldest existing records we have of Ancient Egyptian Theatre dates back to about 2600 BCE. The Ramesseum Dramatic Papyrus was written during the Middle Kingdom. Also Ikhernofret’s writings describe a festivals and plays.
Translated and published in 1928 by Kurt Sethe, the Ramesseum Dramatic Papyrus, seems to be a Master Script written by a producer or Master of Ceremonies. It has descriptions and illustrations of the scenes, the dialogue and narration and staging explanatory commentary.
The temple reliefs at Edfu also give descriptions of a New Kingdom Passion Play religious drama performed during the Horus festival. The relief’s text seems to have directions about the staging of the stories and festival and give a sense of the number of actors needed for this spectacle along with the use of props such as statues, and elaborate painted backdrops were used. Symbolic dances and rituals are also alluded to. According to accounts of the a play based around Seth, a live hippopotamus was killed on stage by a priest and the death of Seth occurred when a hippopotamus cake was carved up and eaten.

Some other plays have elements of morality plays with didactic and psychological elements. Creation Dramas were also performed in temples, which were considered to had been the abode of the creator god before the act of creation had occurred. Masks were probably used such as the only surviving ancient Egyptian helmet mask known as the Anubis mask. Masks such as these were probably used by Priest Actors and would represent Gods.

Some performances and festivities were divided into three parts or acts:
·      the defense of Osiris by his son Upuaut
·      the fight of Osiris himself and his downfall
·      the triumph of Osiris when his enemies are defeated.

“Here too, in this same precinct of Minerva at Sais, is the burial-place of one whom I think it not right to mention in such a connection. It stands behind the temple, against the backwall, which it entirely covers. There are also some large stone obelisks in the enclosure, and there is a lake near them, adorned with an edging of stone. In form it is circular, and in size, as it seemed to me, about equal to the lake in Delos called "the Hoop."
[2.171.1] On this lake it is that the Egyptians represent by night his sufferings whose name I refrain from mentioning, and this representation they call their Mysteries
Herodotus, Histories II – from Project Gutenberg.

The involvement of the public during these public displays was at times frighteningly enthusiastic:
... at Papremis they do sacrifice and worship as elsewhere, and besides that, when the sun begins to go down while some few of the priests are occupied with the image of the god, the greater number of them stand in the entrance of the temple with wooden clubs, and other persons to the number of more than a thousand men with purpose to perform a vow, these also having all of them staves of wood, stand in a body opposite to those: and the image, which is in a small shrine of wood covered over with gold, they take out on the day before to another sacred building.
The few then who have been left about the image, draw a wain with four wheels, which bears the shrine and the image that is within the shrine, and the other priests standing in the gateway try to prevent it from entering, and the men who are under a vow come to the assistance of the god and strike them, while the others defend themselves. Then there comes to be a hard fight with staves, and they break one another's heads, and I am of opinion that many even die of the wounds they receive; the Egyptians however told me that no one died.
This solemn assembly the people of the place say that they established for the following reason:--the mother of Ares, they say, used to dwell in this temple, and Ares, having been brought up away from her, when he grew up came thither desiring to visit his mother, and the attendants of his mother's temple, not having seen him before, did not permit him to pass in, but kept him away; and he brought men to help him from another city and handled roughly the attendants of the temple, and entered to visit his mother. Hence, they say, this exchange of blows has become the custom in honour of Ares upon his festival.

Ancient Egyptian Comedies and Satires
While Ancient Egypt is mainly known for the religious and ritualistic dramas, comic plays and satires also were enacted. Local myths supplied story lines for many plays which often had satirical overtones. One drama is related where a pharaoh received five hundred lashes, his wives deceived him, he couldn't make up his mind and became a slave to his advisors; and his architects robbed his wealth. Sometimes the Gods were mocked also in these plays. In some plays a council of gods deliberate for twenty four years about who should inherit Osiris - Seth or Horus. The debauchery of Seth was equal only to his stupidity and Horus wept like a baby on being beaten. These pieces involved dramatic dialogue which was probably sometimes recited and sometimes sung to audiences.
Ancient Egyptian Theatre Practical Exercises and Discussion
1.    In what sense is Ancient Egyptian Theatre like the storytelling drama of earlier times and in what sense does it seem more like Ancient Greek Theatre and Medieval Christian Drama?
2.    Why do you think Ancient Egyptian Theatre moved towards more formal theatre and religious conventions and forms in developing its drama?
3.    Read the story of the life of Osiris and create your own ritual drama which involves dance and movement, as well as narration, to act out the story. You may also want to do this as a Reader’s Theatre style piece. An explanation of Reader’s Theatre (which is a modern approach or form of drama) is available at http://olc.spsd.sk.ca/De/PD/instr/strats/readerstheatre/index.html

The following website has the story of Osiris: http://www.egyptartsite.com/osi.html

After a considerable while Hathor, Lady of the Southern Sycamore, came and stood before her father, the Universal Lord, and she exposed her vagina before his very eyes. Thereupon the great god laughed at her. Then he got right up and sat down with the Great Ennead. He said to Horus and Seth: "Speak concerning yourselves."
Seth, great in virility, the son of Nut, said: "As for me, I am Seth, greatest in virility among (the) Ennead, for I slay the opponent of Pre daily while I am at the prow of the Bark of the Millions, whereas not any (other) god is able to do it. I should receive the office of Osiris."
Then they said: "Seth, the son of Nut, is correct."
Onuris and Thoth let out a loud cry, saying: "Is it while a bodily son is still living that the office is to be awarded to a maternal uncle?"
Then said Banebdjede, the living great god: "Is it while Seth, his elder brother, is still living that the office is to be awarded no the (mere) lad?"

Ancient Mesopotamian Performance
Probably the earliest writer whose work was performed was the Sumerian (present day Iraq) poet and writer Enheduanna (Sumerian) 2285 BC – 2250 BC. She is probably the earliest female or male writer whose work was published and performed. Her work is often regarded as lyrical and ritualistic and the performances of her poetry probably had some of the ritual elements of Ancient Egyptian rituals and theatre. She was of royal ancestry and was appointed high priestess at a young age. She composed at least 42 hymns to be sung and performed with rituals and performed actions accompanying the sung lyrics. Below is a portrait of Enheduanna from a frieze and a copy of the lyrics from one of her performed hymns. 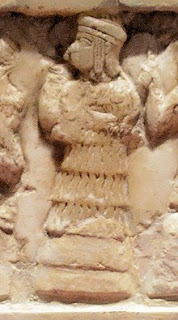 “Beloved of Enlil - You made it (the storm) blow over the land,
You carried out the instructions of An.
My Queen, the foreign lands cower at Your cry,


In dread (and) fear of the South Wind…”